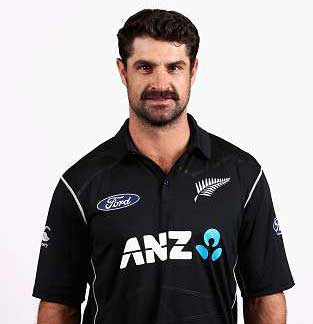 
Colin de Grandhomme is a Zimbabwean-born cricketer, who plays all forms of the international cricket for New Zealand. He made international debut against his birth country. He won the Man of the Match award in his first test match and became fourth New Zealand player to do so.

New Zealand take ODI series 1-0 after yet another called off [+]
Kiwis were well ahead of the DLS target when rain forced the players off after 18 overs of the chase.

Rain washes out Hamilton ODI after stop-start [+]
However, the hosts gained crucial Super League points to rise to No.3 on the table.

Suryakumar century sets up India win over New Zealand [+]
Suryakumar Yadav hits an unbeaten 111 off 51 balls as India hammer New Zealand to take a 1-0 lead in the three-match Twenty20 series.

Guptill, Boult left out of Kiwis white-ball squads [+]
New Zealand usher in new era with veteran duo on the outer for India series.